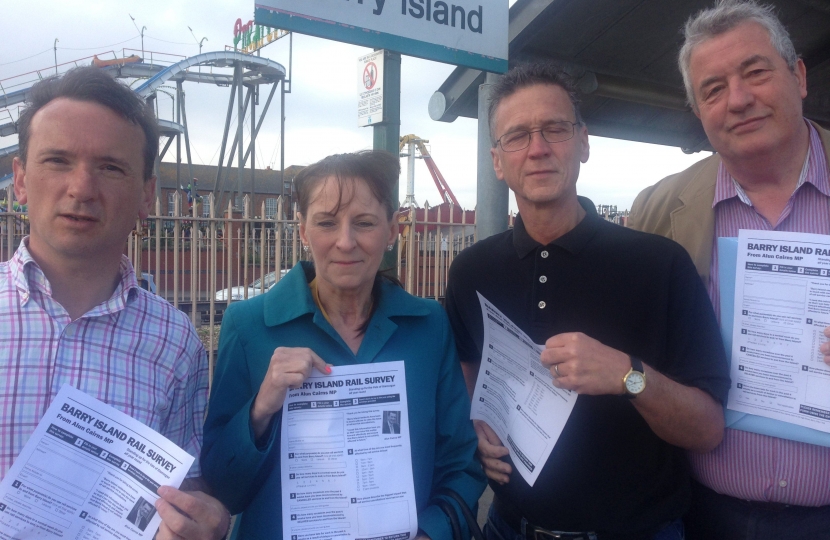 Vale MP Alun Cairns has launched a survey of Barry Island rail passengers in response to continued terminations of the service from the Barry station to the Island. He joined with Andy Green of the Barry Ideas Bank and Jill and Neil Woodward of the Island Residents Association to start the process of surveying rail users last Thursday.

The survey is designed to measure the impact of the problem. Results so far show deep frustration with frequent cancellations, a problem mentioned by every respondent. Completed surveys also describe how rail service terminations at Barry station are causing Island residents to be late for work, incur taxi fares and miss appointments.

In the past year, 437 trains to Barry Island have terminated at Barry station or Cardiff Central station. This averages at 8 times per week across the year.

The cancellations are primarily a result of decisions made by the rail operators, Arriva Trains Wales, and Network Rail to terminate and re-start the service at Barry to make up lost time and reduce delays along the line. Arriva Trains Wales have explained to Alun Cairns that “decisions for terminating (Barry Island) services are initiated by our Control to recover the service and restore the advertised timetable.”

The Vale MP however, worries about the impact of this policy on Island residents. He said, “I have launched this survey so that the impact of the decisions to terminate Barry Island services at Barry station is appreciated.

“Many residents have told me how they have had to shell out for taxis or walk the causeway, often late at night and in wintry conditions. Many more have described how they have been late for work or missed appointments as a result.

“I will be taking this matter up with Arriva and using the findings of my survey to illustrate the case for terminating fewer trains to the Island. In the meantime, I encourage everyone affected by delays and cancellations to seek the available refunds and compensation.”