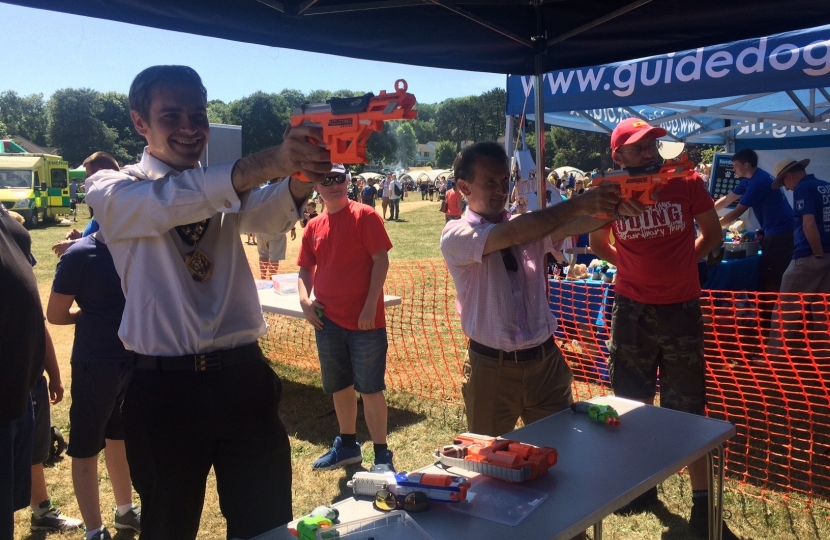 At the weekend Romilly Park in Barry played host to the 65th Barry Scout and Guides Fete, a local tradition since 1933.

Thousands of Scouts and Guides were joined by people from across the community. All who attended the Fete were treated to the Scouts and Guides Band, along with many other performances from groups like Goshin Karate and Motion Control Dance. There were also a range of fun activities for people to participate in.

The community came together to celebrate the young people involved with the Scouts and Guides, which currently stands at around 2,000. The event offered the opportunity for the groups to raise money so that they can continue to offer fun-filled activities for boys and girls across the district.

Also in attendance was Vale MP, Alun Cairns, who joined in with the activities at the Fete and used the opportunity to pay tribute to those who work hard throughout the year to ensure that events like this are possible. Mr Cairns said, “It was a real pleasure to visit Barry Scout and Guides Fete this weekend. I know that a lot of hard work went into putting on the event and I am delighted that it was such a success.”

“I want to pass my congratulations to all who received awards at the Fete, including Linda, Janet and Phil, who were celebrating landmarks in the time they have served with the Scouts and Guides. Local volunteers, who have given years of dedicated service, are pillars of the community. Their hard work ensures that so many young people across the Vale can enjoy the experiences of being in the Scouts and Guides.”

Mr Cairns singled out the dance group Motion Control Dance for the way in which they handled some technical difficulties. He commented, “I was very impressed with the maturity and professionalism shown by Motion Control Dance as they continued with their routine despite technical difficulties. Their performance was excellent and I’m delighted for the youngsters involved.”