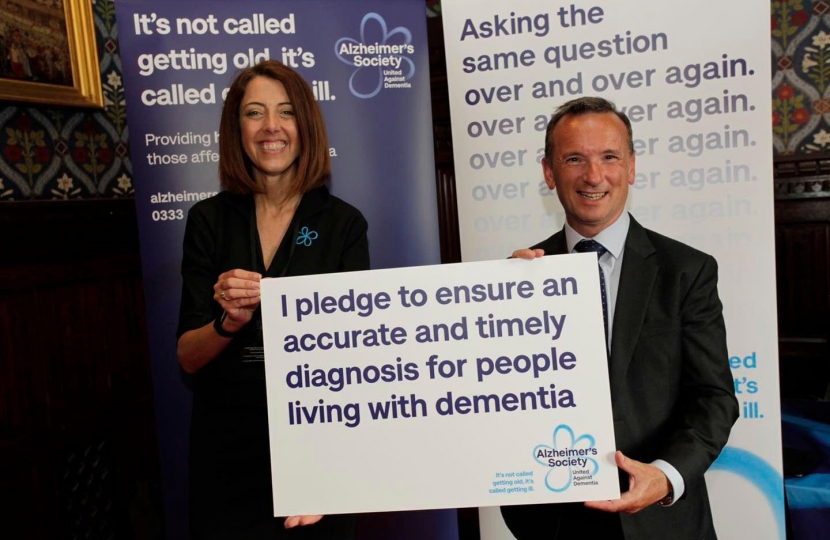 This World Alzheimer’s Month, Alun Cairns MP is supporting Alzheimer’s Research UK to encourage more people with and without dementia to register to take part in clinical trials across the nation, and ultimately find life-changing treatments sooner. New figures reveal significantly fewer people are taking part in dementia research, compared to those for other leading health conditions.

In 2020-21, just 61 volunteers were recruited to late-stage dementia drug trials supported by the NIHR Clinical Trial Network – that’s 100 times fewer than cancer, and 10 times fewer than either stroke or coronary heart disease.

There are nearly one million people in the UK living with dementia, with 1378 estimated to be living with the condition in Vale of Glamorgan. Yet there are currently no treatments available in the UK that slow down or stop the diseases that cause dementia, such as Alzheimer’s.

Alun commented “I’m proud to be a Dementia Research Champion and issue a clarion call encouraging people from all backgrounds to participate in dementia trials. Research has the power to transform the lives of everyone affected by dementia – but it will take all of us to bring about the life-changing treatments people desperately need. Dementia is the greatest long term health challenge we face in the UK, and I am particularly keen to help ensure everyone who receives a dementia diagnosis in Vale of Glamorgan is made aware of the research opportunities available to them. I look forward to playing my part in the coming weeks, and working closely with Alzheimer’s Research UK to help drive progress in dementia research.”

The Vale MP says more people taking part in dementia research is needed if life-changing treatments are to be discovered and encourages people living in Vale of Glamorgan to register with Join Dementia Research - the service which matches people to dementia studies in the UK.

David Thomas, Head of Policy at Alzheimer’s Research UK, said “We’re delighted to have the support of Alun Cairns on such an important issue. People with dementia need MPs like Alun who will champion research in parliament and signpost the ways in which the public can get involved in the search for life-changing dementia treatments.

We know the public appetite for taking part in research has never been greater – with more than two-thirds of people in the UK reporting a willingness to get involved in dementia research, yet just 2% of people living with dementia are registered with Join Dementia Research.

We would urge people with or without dementia who are interested in taking part in research, to register through Join Dementia Research online or by calling 0300 111 5 111.”

"I will be hosting a Dementia Friendly Information session in Llantwit Major on Thursday 13th October, from 11am – Midday, at the Llantonian Hall.

This is designed to support those in the Vale living with dementia and their families. The workshop will focus on developing greater awareness and understanding of dementia so you can best support and take action on behalf of people affected by dementia in the community."

Information can be found here.