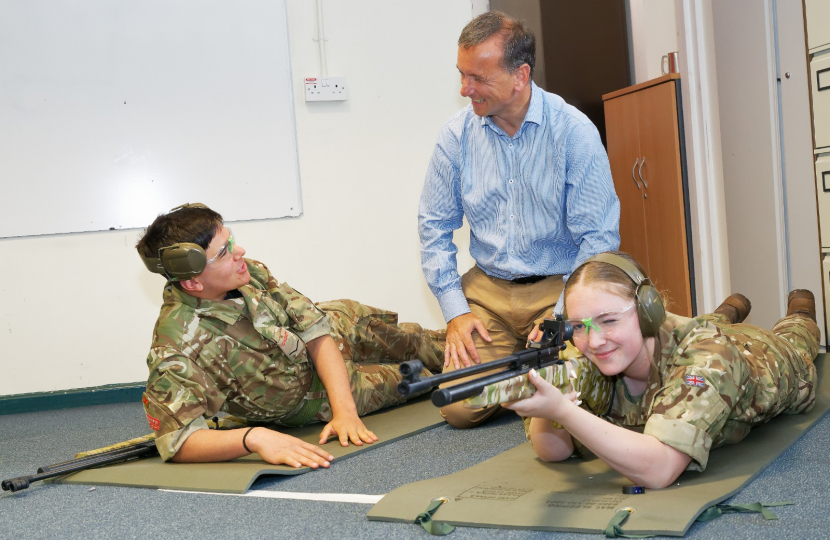 After first meeting the CAVC CCF at last year’s Remembrance Day Parade, the MP requested a visit to see them in action and to publicly show his support for the programme. The cadets greeted Alun at their Cadet Block before taking him to an air rifle demonstration, followed by a display of First Aid.

“It was brilliant to be welcomed by the CCF team at Cardiff and Vale College on Friday. I was totally impressed by the cadets’ determined attitude and work ethic as young adults.

“Under the fantastic tutelage of CCF Contingent Commander Tom Jones the CCF here at the Barry campus have grown from strength to strength. I first met them at the Remembrance parade last November and was also impressed then by their professional demeanour.

“The skills they are gaining from their time at CCF will be totally invaluable in their future careers after leaving education. Hopefully we can continue to encourage more young people through this both fun-filled and important experience.”

“It was great to see Alun Cairns visiting one of Wales’ newest CCFs today, to see the work of the Adult Volunteers and cadets of the College.

“He has always been a great supporter of the cadet movement and fully appreciates the many benefits and opportunities that young people can gain from their participation. It was really gratifying that he took the time to visit and see at first hand our cadets in action.”

The CAVC  CCF comes at no cost for students and offers multiple benefits to students at the College. Alongside exciting challenges and activities, there is the opportunity to go on expeditions in the UK and abroad and to go on an annual camp with cadets from other schools and colleges.

The Army Proficiency Certificate syllabus teaches a wide range of leadership and transferable skills such as the ability to command tasks, make decisions under pressure, plan and organise tasks and work effectively as an individual or as part of a team. Such skills will equip a young person for life and also help boost university or job applications.

Through cadet training you can also gain qualifications such as the Duke of Edinburgh Award, BTEC First Diploma in Public Services or Music or the ILM Certificate in Team Leading.

“It was a pleasure to welcome Alun Cairns MP to our Barry Campus to meet our Combined Cadet Force. Being a cadet at CAVC means so much more than participating in parades – it teaches invaluable life skills that can be transferred to any career path or situation.

“Alun’s visit provided an excellent opportunity to show him the excellent work the our CCF does in preparing young people in the region for any challenge that may face them in the future.”