Alun Thanks RBL Ahead of 75th Commemoration 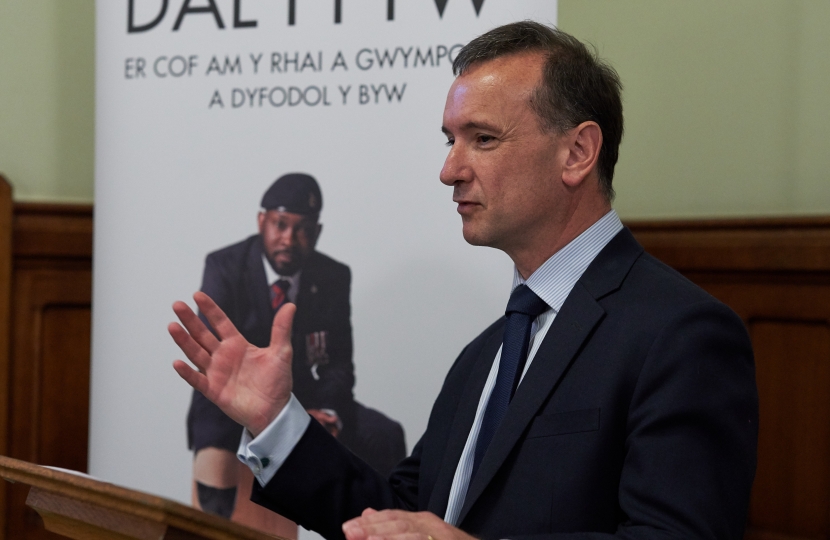 Vale MP Alun Cairns has met with The Royal British Legion (RBL), both in Westminster and in Barry, ahead of next month’s 75th Anniversary Commemorations of the D-Day Landings.

Mr Cairns welcomed the charity to Parliament and spoke at the Wales-focused event in his role as Secretary of State for Wales. The Vale MP thanked the RBL team for the service they provide across Wales and spoke of his work with the Barry Branch over the years, which includes holding a ‘100 Wreath Memorial’ on the 100th Anniversary of the end of WWI.

The Royal British Legion’s Wales Area Manager, Antony Metcalfe, attended the event in Parliament along with military veteran Chris Headon and representatives of the charity. The visit to Parliament provided an opportunity for The RBL to discuss support for the Armed Forces community in Wales.

Antony Metcalfe the Legion’s area manager for Wales, said, “I was delighted to see Alun Cairns and we were grateful that he took the time to meet us. This event offered a great opportunity for us to spread the word about the range of services that we provide in Wales and for Alun to hear first-hand from a number for people who we have supported since they left the Forces. I look forward to working with Alun to ensure the needs of our Armed Forces community are reflected in policies at all levels in Wales and the UK”.

Mr Cairns said, “It was a pleasure to welcome The Royal British Legion to Parliament and to thank them for providing vital support to service personnel, veterans and their families across Wales. They do incredible work, particularly in the Vale and it’s a privilege to work with them”.

Locally, Alun caught up with the Chair of The RBL’s Barry Branch, Teresa Goodwin, and Community Support Officer, Amanda Wells. He said he was very impressed with the work they are doing locally and discussed preparations ahead of the 75th D-Day Landing Commemorations on 9th June. The Commemoration will take place at Barry Cenotaph at Memorial Hall and the Service is due to be held at St Mary’s Church, Holton Road, Barry.

Teresa Goodwin explained, “We are increasing our activity with ex-service families in the area and are pleased that Alun Cairns will be supporting us with a social media campaign explaining the services that the Royal British Legion provides. You can find more information on our Facebook page ‘RBL Poppy Appeal, Barry and Area’.”