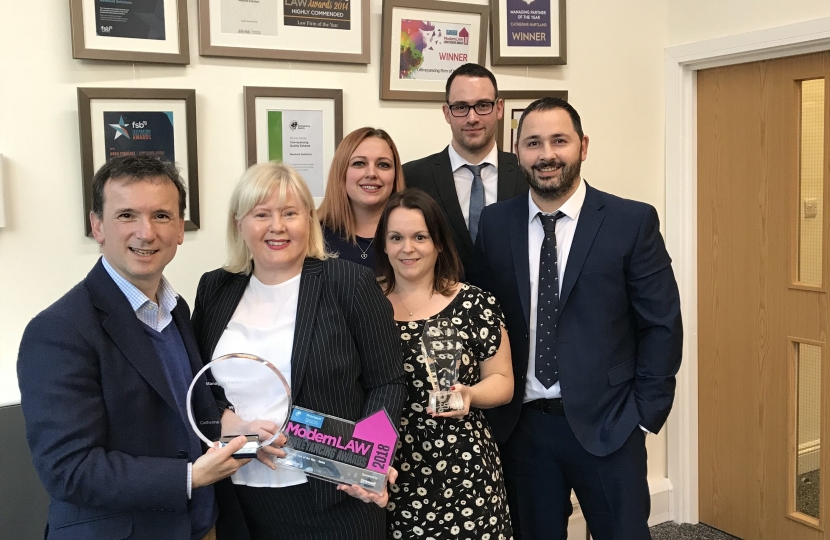 A local Barry law firm has once again been successful at the prestigious Modern Law Awards in Manchester, achieving in a number of the categories on offer and adding to the many awards they have collected in recent years.

The achievement has been recognised by Vale MP, Alun Cairns, who visited the team at Newbold to congratulate them on their awards. Mr Cairns said, “I want to congratulate everyone at Newbold Solicitors for their hard work and on the recognition they have received at the prestigious Modern Law Awards and the Federation of small business awards. In particular, I want to pay tribute to Catherine Hartland for winning Managing Partner of the Year.”

Mr Cairns added, “I’m delighted to see the achievements of the whole team at Newbold, securing the runner up spots in two UK-wide categories. It’s fantastic that Barry is represented so strongly and Newbold demonstrate the professional quality that we have locally. It goes to show that Barry is an excellent place to work.”

Catherine Hartland personally thanked Alun Cairns for all the support he gave her when she first set up the firm in 2010.  Catherine stated, “In 2010, I had no support, it was a very challenging time for me personally. Alun was an amazing sounding board. He recognises and nurtures entrepreneurial talent in the Vale.   If anyone is out there with a great idea, who is resilient and enthusiastic, the Vale under the leadership of Alun is a great place to start your business.”