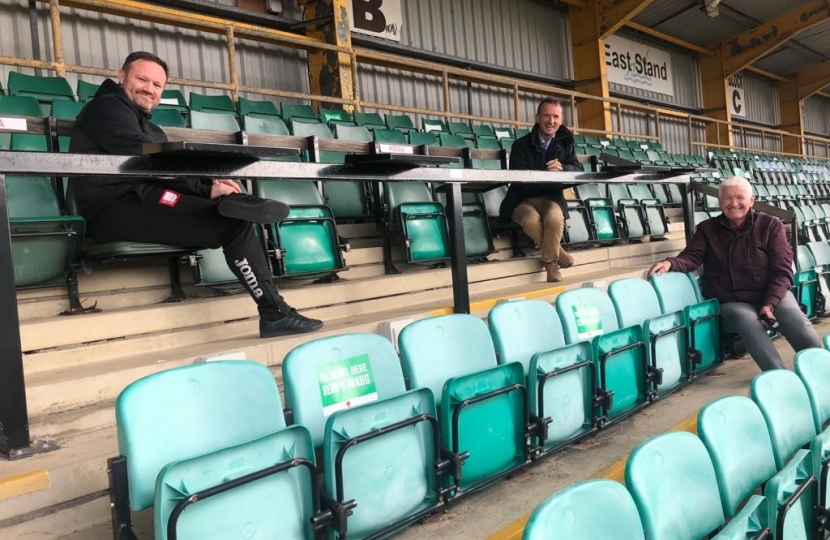 Barry Town United will receive vital financial support from a new package of funding that the UK Government announced to help local football clubs. This comes after local MP Alun Cairns and Barry Town United teamed up again to call for support whilst spectators are excluded from matches.  They will receive support from a £750,000 package from the FAW & The National Lottery to give lifeline to Cymru Leagues clubs

Vale MP Alun Cairns has welcomed the £750,000 financial package for Welsh football clubs that the UK Government has facilitated, established by the Football Association of Wales (FAW) and the National Lottery.

Mr Cairns has been working with Barry Town United to make the case around funding and is delighted that there has now been a positive result which offers a lifeline to local football clubs. The agreement will provide all 44 Cymru Leagues clubs with financial support as part of a unique partnership with The National Lottery.

The financial package will see clubs in the JD Cymru Premier, JD Cymru North and the JD Cymru South receive funding while matches continue to be played behind closed doors, owing to the current COVID-19 restrictions.

Barry Town is an example of how football clubs and training facilities across the Cymru Leagues are often at the heart of their communities. They act as central hubs that give further opportunities for children and adults to be active, while bringing a source of pride to their towns. This funding stream recognises the essential role that Cymru Leagues clubs play beyond matchday.

Vale MP Alun Cairns said, “This is fantastic news for Barry Town United and for clubs across the Cymru Leagues. I have been speaking with ministers at Westminster to press the case and I am delighted that we have got this result. This will play a big part in supporting football clubs, which is so important when, as with the case for Barry Town, they play such a key role in our community.”

Jonathan Ford, CEO of the Football Association of Wales, “At the FAW, we are incredibly grateful for our unique partnership with The National Lottery and the funding stream which has been provided for our clubs across the Cymru Leagues, while matches continue to be played behind closed doors.”