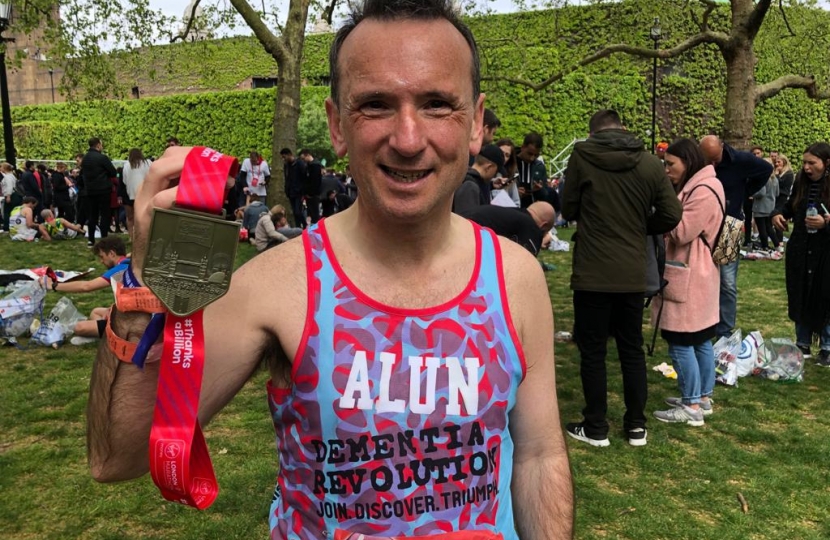 Over £7,000 will go to Dementia Revolution (a joint campaign by Alzheimer’s Society and Alzheimer’s Research UK) and Guide Dogs Cymru after Vale MP Alun Cairns completed his 8th London Marathon on Sunday.

Mr Cairns has raised almost £60,000 in his Marathon efforts over the years and has expressed his delight that more money will go to causes close to his heart again this year.

Following his completion of the 26 mile course in 3 hours and 45 mins to raise money for his chosen charities, Mr Cairns said, “I was delighted when I crossed the finish line, knowing the generous donations that I have received will go a long way in supporting the important work that the Alzheimer’s Society, Alzheimer’s Research UK and Guide Dogs do in our community.”

He added, “The London Marathon is a fantastic occasion and it was brilliant to see runners from Barry and the Vale getting involved. So many worthy causes will have received a much needed cash boost, which will aid their efforts in our community. Both Dementia Revolution and Guide Dogs mean a lot to me and I want to thank everyone for the incredible support.”

Sue Phelps, Country Director for Alzheimer’s Society Cymru said, “Dementia is the biggest health threat facing society and there are currently no effective treatments to slow, prevent or cure it. Today, over 45,000 people are living with dementia in Wales. We would like to extend our heartfelt congratulations and thanks to Alun for joining the charge toward a cure.”

Helen Davies, Head of Public Affairs at Alzheimer's Research UK, said, “It was incredible to see people take to the streets at this year’s Virgin Money London Marathon in aid of the Dementia Revolution. As well as raising much-needed funds to support groundbreaking research at the UK Dementia Research Institute, we were also able to overthrow old attitudes about dementia. We’d like to say a huge thank you to Alun for joining the Dementia Revolution and running the London Marathon. We will transform the lives of everyone impacted by dementia.”

There is still an opportunity to donate before the money is handed over, with the fundraising page still open for donations. You can still donate via: www.virginmoneygiving.com/aluncairns