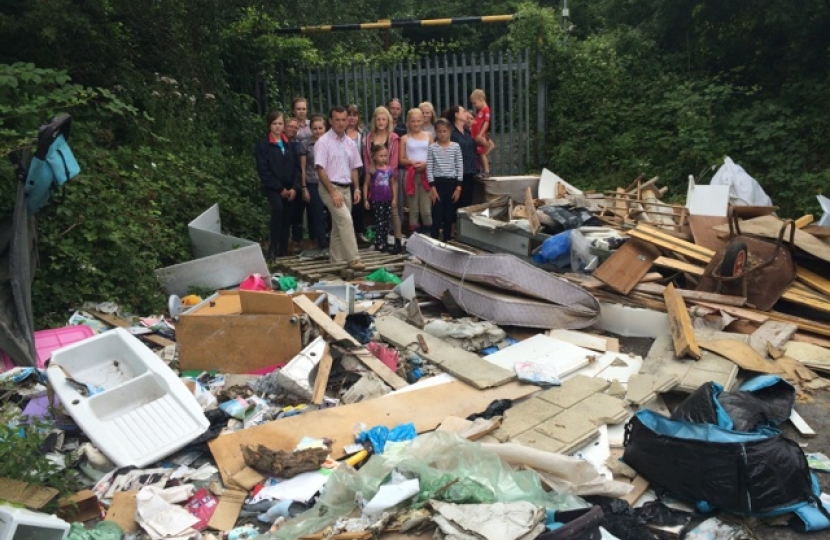 Local MP Alun Cairns has called on the Vale Council to act against Fly tipping near Wenvoe Quarry, which is posing a threat to animals, children and the environment.

Local residents contacted Alun Cairns to help resolve the on-going situation where Fly-tipping has become a common occurrence in their area. They have previously had little success when they contacted the Vale Council.

Earlier this week Mr. Cairns met with local residents, many of whom are members of Parry Stables to discuss the problem of fly tipping. He saw first-hand the damage that it is causing to their local community. The rubbish being dumped outside the Quarry has become such a problem that children can no longer ride their horses safely in the countryside, local people are unable to walk their dogs and rats now have a permanent presence. Alun Cairns also saw two fridges that had been dumped, which pose a significant risk to children.

“I was disgusted to see the amount of rubbish that has been created by fly tippers. It has now got to a stage where Wenvoe residents can’t enjoy their own countryside. This is absolutely unacceptable. The presence of commercial rubbish showed possible signs of asbestos and even knives were littered across the road. This is not the message we should be sending to the young people who use the area.”

“I have written to the council calling for action, and I urge them to take immediate steps. The rubbish must be cleared up promptly and those responsible need to be punished. A long term plan to prevent fly tipping in the future should also be considered, to ensure that the Wenvoe country side is restored to its natural habitat. I hope they will use mobile cameras and liaise with the police.”

“I thank Parry Stables for contacting me on the matter. We will now work together until the Vale Council solve this issue.”