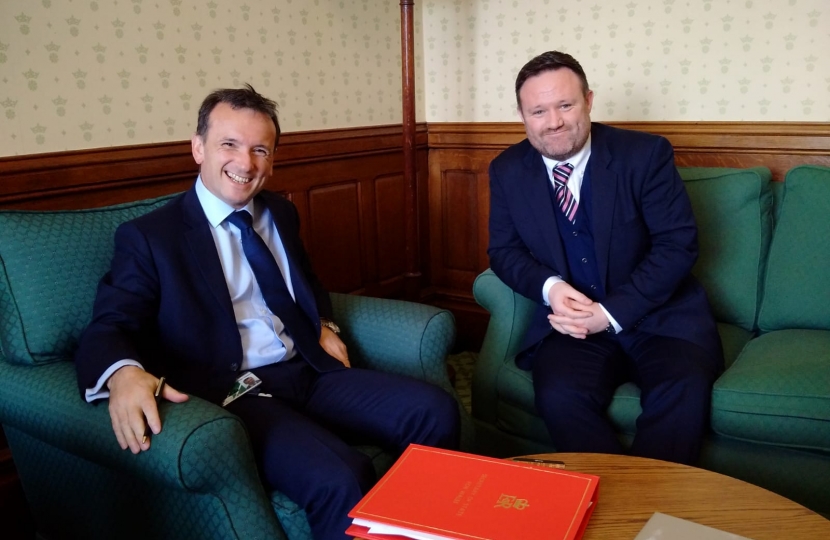 Barry Town United boss Gavin Chesterfield has spent a day shadowing Vale MP and Secretary of State for Wales Alun Cairns as part of his UEFA Pro Licence course with the Football Association of Wales (FAW). The Pro Licence is the highly prestigious level of coaching qualification that allows any holder the opportunity to work in the top flight of any country in Europe.

Gavin has led Barry Town into over 400 games, with the side currently sat in 3rd place in the Welsh Premier League. He also reached the Semi-Final of this year’s Welsh Cup and has qualified for the Europa League!

One of the tasks that Pro Licence candidates have to fulfil is “Following a Leader” and with the Vale’s local MP holding a position within the UK Government Cabinet, Gavin Chesterfield was keen to take the opportunity to live a day in the shoes of Alun Cairns.

Over the course of a day in Westminster, Mr Cairns fulfils a variety of tasks and wears many hats as he switches between his Ministerial role and his role as the representative for the Vale of Glamorgan. During Gavin’s visit, Alun’s day included but was not limited to, a meeting of the Cabinet, a Welsh Affairs Committee briefing, Ministerial meetings, discussions with local business leaders and a statement from the Prime Minister in the Chamber. This provided Gavin with the opportunity to see Alun’s leadership in a number of different areas.

Gavin is due to complete his UEFA Pro Licence course in September 2019 and commented on his time spent with Alun, saying, “Having known Alun for several years, I was keen to see him work within his natural environment. I had a fantastic day and I could see that there are so many parallels that can be drawn between leadership in sport and leadership in politics. I am now very appreciative of the sheer workload involved and to see Alun lead his team in a variety of situations at such close quarters was an absolute privilege.”

Mr Cairns said, “It was a pleasure to welcome Gavin to Westminster for the day, so that he could shadow me as I carry out duties in both my role as MP for the Vale and Secretary of State for Wales. I hope that he found this to be a useful experience and I wish him all the best with the rest of his course. He’s been doing an excellent job of leading Barry Town so far this season and I know that everyone locally will be proud of the team’s performances.”