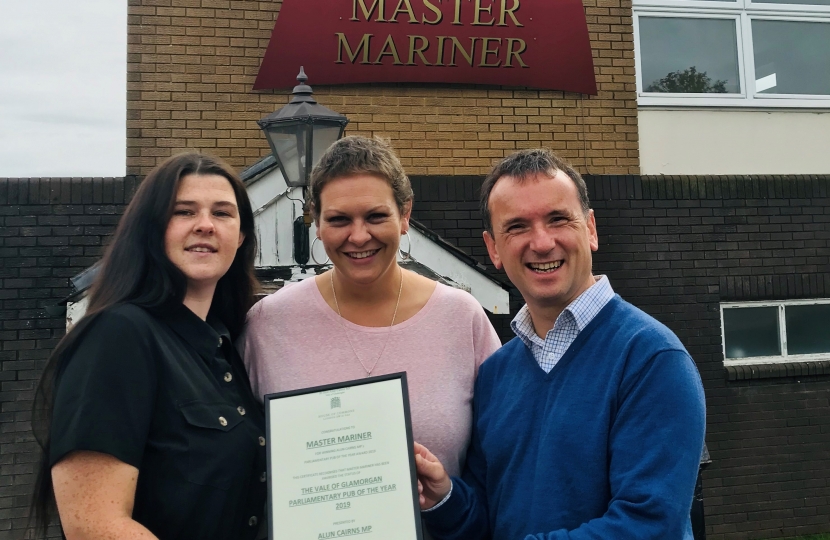 Just weeks after securing its future as a pub, following the threat of closure, the Master Mariner has been crowned the Vale of Glamorgan’s Parliamentary Pub of the Year 2019.

Vale MP Alun Cairns held his annual competition amongst local pubs, with the winner decided by a public vote in which hundreds of pub goers voted for their favourite pub.

The criterion for the competition is ‘Best at What They Do’, which could include offering quality food, their range of beer, music, providing a community hub or a top attraction for tourists. In the case of the Master Mariner, they demonstrated their qualities as a true community pub. This was evident in the huge number of votes they secured in the competition from locals.

The Master Mariner will now go forward as Mr Cairns’ Vale nomination for the national UK competition, with the overall winner presented with an award at the House of Commons.

Mr Cairns said, “I am delighted that the Master Mariner has won the Parliamentary Pub of the Year award. They thoroughly deserve it after the huge community effort to save the pub this year. The Master Mariner represents what it is to truly be a pub for the local community and it’s clear to see the how strongly residents feel about the pub. I want to pay tribute to Helen, Abi and everyone else involved with the Master Mariner. Helen has done an excellent job during her time managing the pub and Abi has been such a passionate supporter of the pub, as demonstrated through her rallying for votes in my competition!”