MP Engages with Public on Brexit 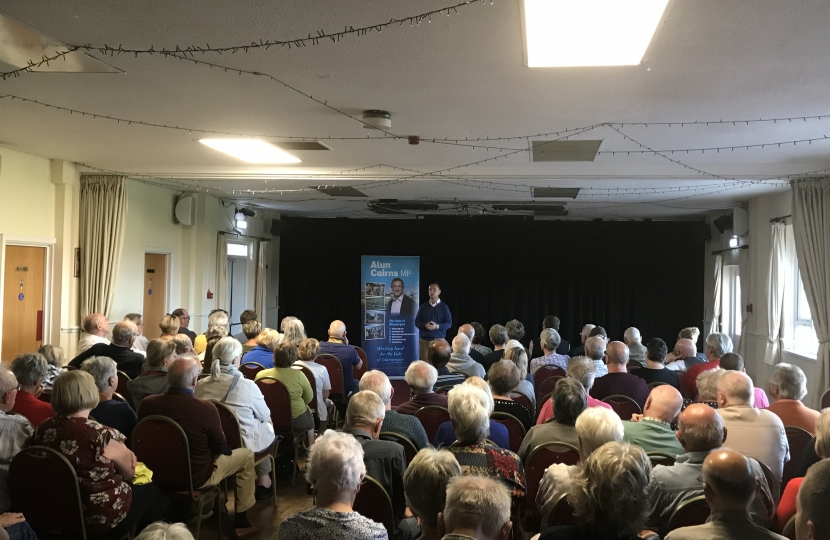 Vale MP Alun Cairns has held his second public meeting on Brexit in as many weeks, giving constituents the opportunity to discuss the latest developments and allow for a question and answer session.

The meetings have taken place at Llantwit Major Rugby Club and the Master Mariner Pub in Gibbonsdown, Barry, with hundreds of people attending from across the Vale of Glamorgan. For constituents who are interested, there is a further meeting being planned in the coming weeks. More information will be made available in due course.

Mr Cairns used the opportunity to outline the Government’s commitment to delivering Brexit. He explained that it is the Government’s priority to secure a deal with the European Union before the leaving date of October 31. However, should that not be possible, he explained that detailed preparations have been made in the event of a ‘No Deal’ outcome.

Mr Cairns commented, “as residents will be aware, I’ve held many public meetings on Brexit over recent months across the Vale. I believe it’s incredibly important for elected representatives to be available and engage with constituents on key issues. That’s why I am keen to hold regular meetings of this kind, to make myself as accessible as possible and provide people with the opportunity to partake in a question and answer session on the big issues of the day. I felt the meeting was useful, generated debate from both sides and hopefully made clear my position – that we absolutely need to respect the result and leave the EU.”

He added, “much has been made of the Pro-EU activists who took the opportunity to approach me outside the meeting at the Master Mariner, before it started. While I absolutely respect their right to make themselves heard, I was very clear in explaining to them that I also respect the result of the referendum.  It is vital for our democracy that we deliver on the vote to Leave, which with 17.4m votes was the biggest democratic mandate the country has ever seen.”