On Patrol with Barry Police 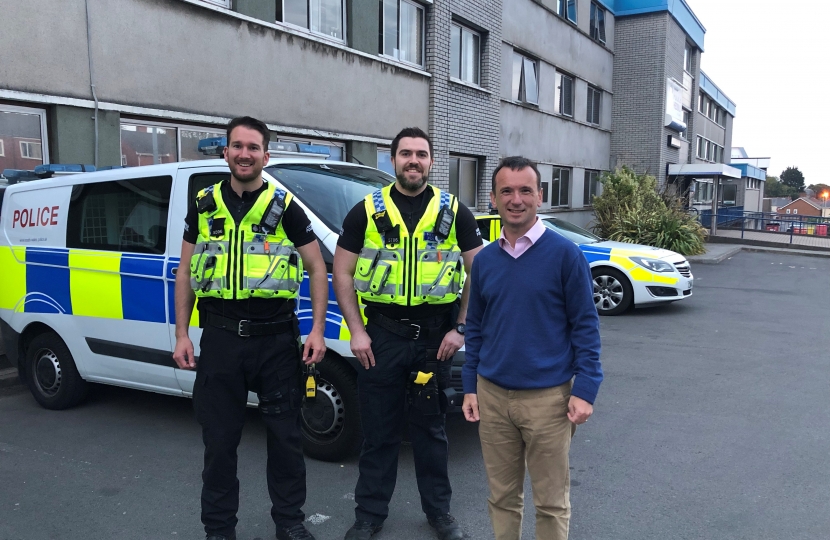 Our local Police Officers do a fantastic job.  I say this not out of blind support but from experience in shadowing the response team on a busy night in Barry some weeks ago.

This is something I do from time to time.  It is a real privilege and eye-opener.  Nothing compares with being out and about in the police van, responding to calls, seeing first-hand the challenges and risks they face.

I have nothing but respect for the officers I have seen in action.

It was a warm evening that started at 6pm.  Hot nights are complicated with members of the public drinking more than usual.  The first call was to pursue an offender that hadn’t turned up to court that day.

He had a history of violence and the situation could have escalated very easily.  To the credit of the officers, they did all possible to position themselves to secure arrest.  However, winning the offender’s respect was their key priority.  By talking in a warm and chatty way, the offender responded positively and attended the police station voluntarily.

It was difficult to believe that a persistent, violent offender co-operated so favourably. We took the offender to the Custody Suite in Bridgend, where he was processed and placed before the next available court.

Our next call was a blue-light journey to a report of an individual wielding a knife at youths.  A dispute had developed between a group of young people and a resident who was seeking peace and quiet.  The officers established quickly that the offender had mental health issues and was unlikely to be violent.  However, no risks could be taken.  He was calmed down; the youths were asked to provide some space and action was taken to highlight the way each party was seen by the other. The male in question was dealt with in an appropriate manner.

As the evening developed a call came relating to missing children.  We searched the streets, parks and playgrounds surrounding the boy’s friends and family.  Thankfully all was in order and the child was identified relatively quickly.

By nightfall, the pubs became busier and patrols were focussed on High Street and Broad Street.  Again, the relationship between the doormen and the police officers was excellent.  As soon as the doormen suspected challenge or illegal activity, a signal called us over to the pub or club.  So many situations were calmed down, well before they escalated into something ugly.

As a result of the unstinting work and proactive activity, our community was kept safe and calm.  The breadth of calls demonstrates that no police officer knows what they will face from one hour to the next.  This is a risk they accept in our interest.

I do recognise, however, they were stretched.  Many calls came through and there was a need to prioritise.  Some residents had to wait for their response, whilst the Police were dealing with the most urgent cases.  Those waiting, were frustrated and felt that they were not being taken seriously.  This was not the case.

The Prime Minister has announced the recruitment of 20,000 new police officers.  This will make a real difference to the streets in Barry and across the Vale.  The Police Officers I have come to know have responded very positively since the announcement.  Recruitment starts immediately.

I look forward to joining them when they start their shifts soon and my appreciation goes to those officers I joined that night.