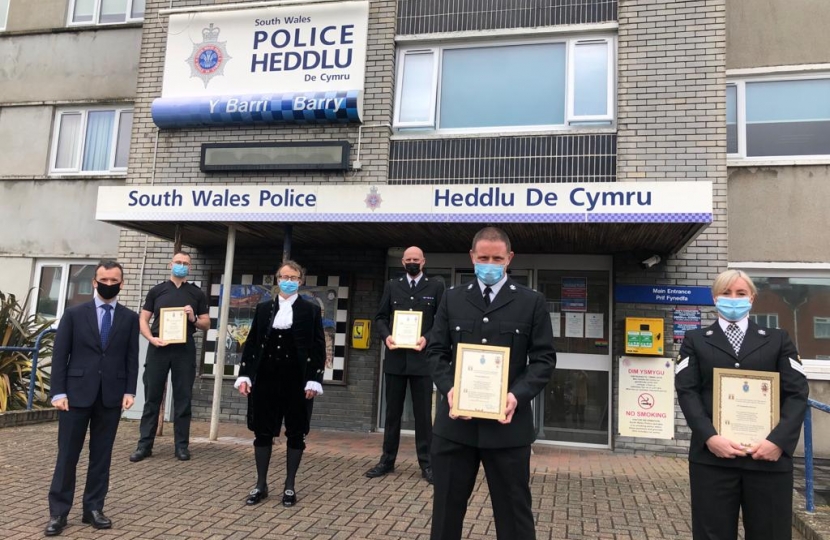 High Sherriff for South Glamorgan, Andrew Howell and local MP Alun Cairns recognised Barry and Vale Police Officers for their exceptional work during the pandemic, by presenting certificates of service.

PC Steve Powell, PC Jamie Williamson and Police Sergeant Samantha Johnson were nominated by colleagues for their outstanding efforts of protecting and supporting the Vale of Glamorgan community during the past twelve months. Chief Inspector, Tony Williams, who’s been Operational Commander in the Vale of Glamorgan for the past four years also received a Certificate of Service – before moving on to a post in Rhondda, Cynon, Taff area.

The Officers were presented with awards by the High Sherriff and Alun Cairns MP at a short, socially distanced ceremony outside Barry Police Station.

Alun Cairns MP said, ‘I have the greatest resect for the Police at any time but the last 12 months have been extremely difficult for everyone, notably local officers seeking to support the community and to retain order. Policing only works with the consent of the community and over the last year they have had to respond to individuals who ordinarily would-be law-abiding citizens, found themselves challenged by Covid regulations. I believe that they have managed to strike the right balance’.

High Sherriff, Andrew Howell added, ‘It was a pleasure to award and recognise these individuals for their magnificent work during these most difficult times.  We owe them a huge debt of gratitude.’