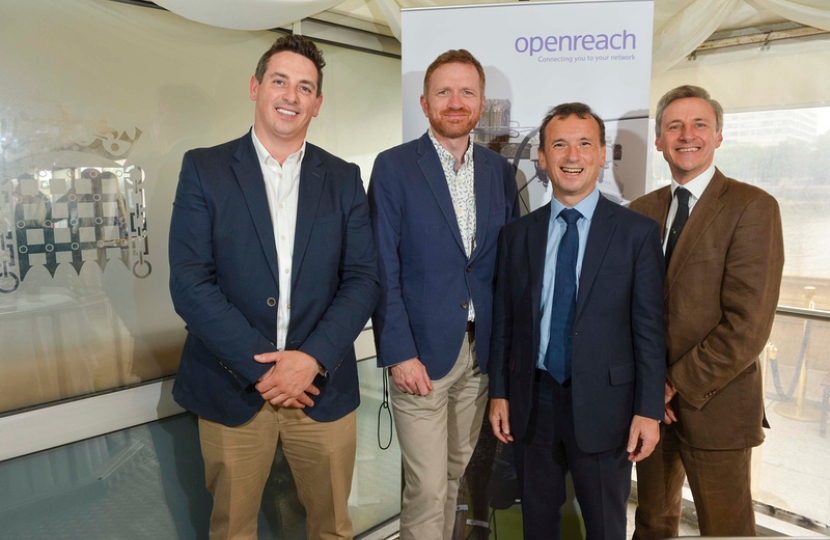 Thousands of rural homes and businesses in Wales are looking forward to a faster future thanks to the arrival of high-speed broadband, including Llancarfan and St Athan in the Vale of Glamorgan.

Openreach, the UK’s largest telephone and broadband network, is announcing that more than 100,000 premises across the UK are now part of its Community Fibre Partnership (CFP) scheme.

More than 5,000 properties are in Wales, and broadband champions from across the country recently celebrated the milestone in Parliament, with representatives from Llancarfan and St Athan joining Vale MP Alun Cairns at the House of Commons.

Openreach’s CFP scheme involves the company splitting the cost of installing faster broadband with the local community. In many cases, the local contribution can be entirely covered by broadband vouchers, such as the Welsh Government’s ABC voucher scheme or the UK Government’s Rural Gigabit Connectivity Programme. In Wales, businesses and communities can also benefit from a more generous Gigabit Voucher scheme following an agreement between the UK and Welsh Governments.

Among those communities across Wales that are either already benefiting from high-speed broadband connectivity or are in the process of being connected as a result of signing up to Openreach’s Community Fibre Partnership scheme, include: Llancarfan, Vale of Glamorgan; Nantgwynant, Gwynedd; Pumpsaint, Carmarthenshire and Paradwys on Ynys Mon.

“The CFP scheme has been a huge success and there are many communities across Wales that are delighted to have fast broadband speeds, despite living in some of the most rural areas. It builds on the work we’re already doing ourselves, and in partnership with the Welsh Government across Wales.”

“Faster broadband is essential for everyday life. There are many advantages of faster speeds, for both home users and businesses, and I’d strongly urge everyone to check if they live in a fibre-enabled area, and if so, get in touch with their broadband provider to find out more about upgrading.

“If you’re one of the few still not in a plan, now’s the time to find out more about Openreach’s Community Fibre Partnership programme and the opportunities it provides.”

“The UK Government is on a mission to digitally connect the whole of Wales and speed up service for communities and businesses. The internet is an undeniable part of everyday life, and reliable access should be considered a right for all citizens.

“I’m pleased that Llancarfan and St Athan have benefitted from this and that more Vale residents will benefit from access to high-speed broadband. Openreach’s initiative in connecting rural parts of Wales to high-speed broadband is making a significant impact and I look forward to continued service improvements in all Welsh communities.”

“I would encourage all communities across Wales who are struggling to access an acceptable or cost effective broadband service to investigate the options an Openreach Community Fibre Partnership like ours can offer. For us as a Community Council, leveraging the 'Access Broadband Cymru' grant from the Welsh Government and engaging with the Openreach CFP team became an incredibly straightforward and expedient process. The key to the success of this has been the strength and support from the local community."

Openreach is using a mix of technologies to deliver the CFP programme, but primarily the latest ultrafast fibre-to-the-premises (FTTP) technology providing broadband speeds of up to 1Gbps. That’s enough bandwidth for a family of four to all stream ultra HD or 4k quality movies or TV simultaneously, without waiting or buffering.

Once Openreach has installed the infrastructure, residents can place an order for the new faster services with a provider of their choice. Openreach provides the telephone and broadband network used by the likes of Sky, BT and TalkTalk. So people are still able to choose from a range of broadband products and packages – they are not restricted to just one supplier.

Across the UK, more than 930 communities have now signed up to the CFP programme, which is available to communities not included in any current roll-out plans for high speed broadband or to those who have fibre broadband but want even faster speeds. Already more than 590 of those are now connected to fibre broadband.

A recent independent report estimates the scheme generates, on average, around £800,000 of benefits to each community. And that having fibre broadband available increases the value of the average property by around £1,700.

The success of the Community Fibre Partnership scheme is a further boost for Wales, where nearly 95 per cent of homes and businesses can already access fibre broadband with speeds of 30Mbps and above.