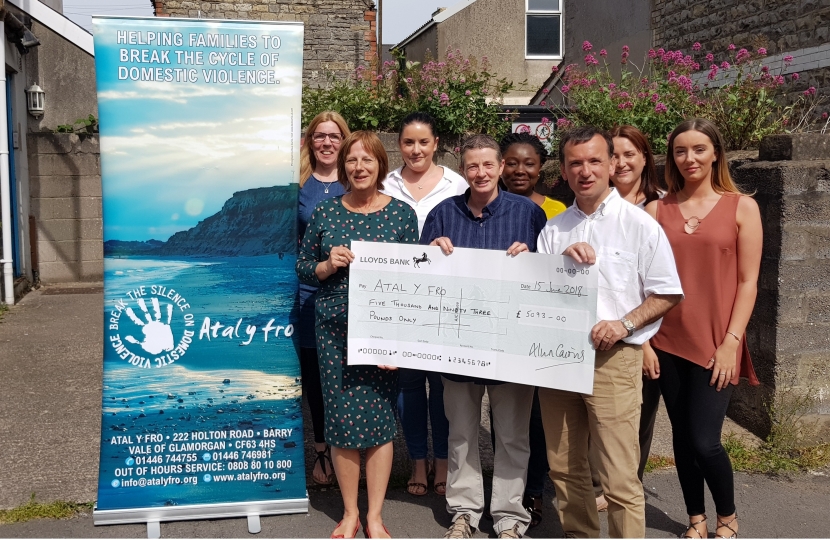 Atal Y Fro, a charity which supports families impacted by domestic violence in Barry and the Vale, has received a substantial donation thanks to Alun Cairns. The Vale MP took part in this year’s London Marathon, with the aim of raising funds for both Atal Y Fro and NSPCC Wales.

Mr Cairns has now completed his seventh marathon, finishing the 26.2 mile course in three hours and fifty-six minutes and his efforts have raised in excess of £10,000 for his chosen causes. As a result, Atal Y Fro were presented with a cheque for £5,093 - which will go towards supporting the work that they carry out helping those who have experienced or are experiencing domestic violence.

Mr Cairns said: “I am always inspired by the reasons why people decide to put on their running shoes and tackle the London Marathon. Whether it is setting a new personal best, raising money for a charity or remembering someone special, it is always something to keep you motivated.

“There are so many worthy causes and this year I wanted to help Atal Y Fro, a charity that does extremely important work in supporting the victims of domestic violence across the Vale of Glamorgan.”

“I was delighted to discover that I had raised over £10,000 for my chosen charities and I am incredibly grateful to everyone who has donated. Both causes are really worthwhile and make a big difference to people’s lives.”

Atal y Fro and NSPCC Wales join a host of other local charities sponsored by Mr Cairns during his participation in the London Marathon since 2012, including Breast Cancer Now and Ty Hapus.