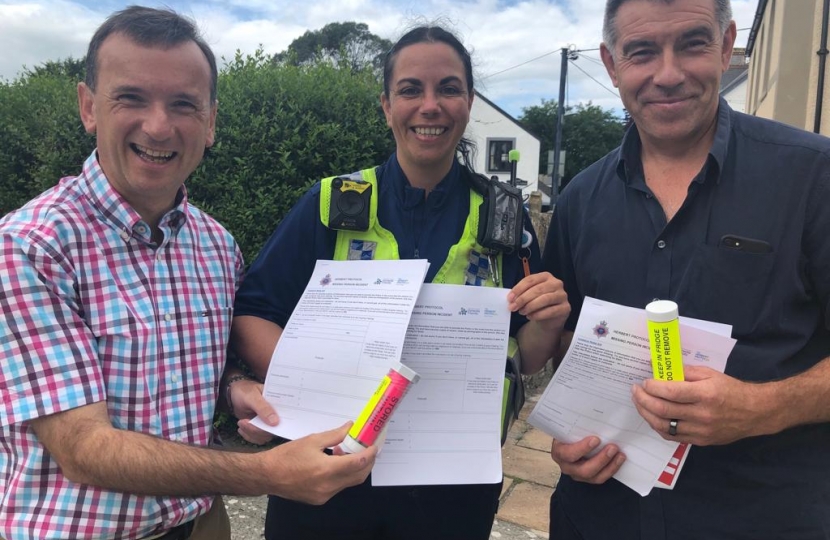 A dementia scheme developed by a local PCSO, Serena James, aimed at protecting the most vulnerable people in society has been championed by Vale MP Alun Cairns, who has called on the Chief Constable of South Wales Police to roll it out across the area.

In recognition of Serena’s initiative to develop the scheme called the Herbert Protocol, Mr Cairns met with the local PCSO for Llantwit Major to learn more about how it can support people living with dementia.

The scheme encourages families and carers to compile useful information which could be used in the event of a vulnerable person, including those living with dementia, going missing. The form, completed in advance, records all vital details such as medication required, mobile numbers, places previously located and a photograph.  The form can be easily handed to the police, in the event that they go missing, to reduce the time taken in gathering this information.

Alun Cairns, who has been leading dementia initiatives in Llantwit and is a recognised Dementia Champion, is so impressed how the scheme has worked locally that he now wants to see the practice used across the whole South Wales Police Force Area.

He said, “I’m incredibly impressed with Serena James’ work and how the Herbert Protocol can support vulnerable people in our community, particularly those living with dementia. If someone with dementia goes missing, this initiative will help to identify where they usually like to go, what their habits are and makes a huge difference in the process of finding them.”

Mr Cairns added, “I’m really pleased that our local PCSO has taken a lead on introducing this in Llantwit. After meeting with Serena, I wrote to the Chief Constable of South Wales Police to ask that he considers using the Herbert Protocol more widely. I can see that it works well and would really benefit communities across South Wales.”