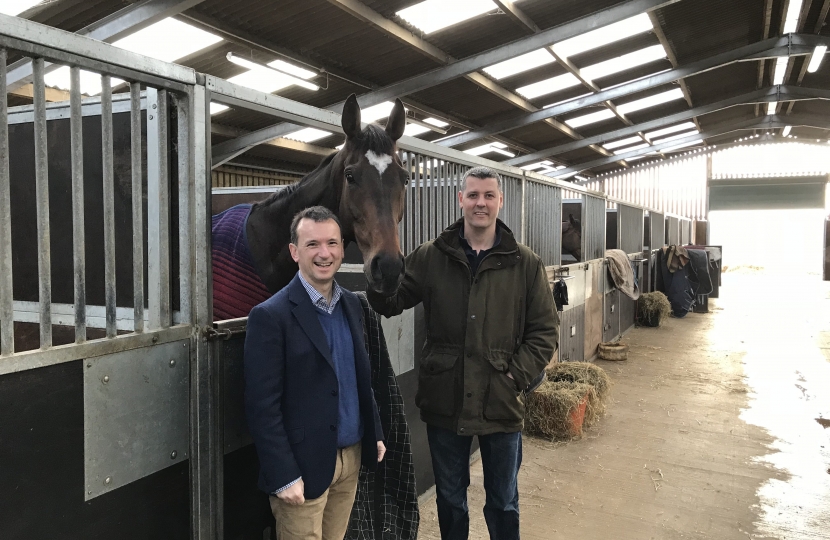 Vale MP Alun Cairns has visited Tim Vaughan, a racehorse trainer based at Pant Wilkin Stables in Aberthin, to speak about the impact of Equine Flu on the racehorse industry.

Following the outbreak of Equine Flu, The British Horseracing Authority (BHA) confirmed that all racing would be cancelled, with a six day shutdown in place until last week. This resulted in racing stables being placed in lockdown, including those of local trainer Tim Vaughan Racing. The local racehorse trainer has been running since 2008 and has enjoyed considerable success, which has attracted interest from a number of high profile fans such as former Manchester United Manager Sir Alex Ferguson and former England Forward Michael Owen.

The shutdown threatened a significant economic impact in the industry across the UK, with a potential knock-on effect in the Vale. Tim Vaughan Racing employ over 30 people and support other local jobs.

As Vale MP, Mr Cairns was keen to find out how Mr Vaughan dealt with the issue and was pleased to learn that his fast response meant he was unaffected and was able to enter horses at Ascot over the weekend.

Speaking about the response by the BHA, Mr Vaughan said that he felt the action taken was appropriate and necessary. Mr Vaughan explained, “I think they nipped it in the bud and did exactly right thing to minimise the loss of racing and loss of the money that the industry generates. It was also lovely to have Alun down and to have him taking an interest in what we do and how this has affected us.”

Mr Cairns said, “It was great to catch up with Tim, to discuss the impact of Equine Flu and how he has managed to get through this nervy period for his industry. It was clear to see that the high welfare standards he upholds and the precaution taken has played a key part in protecting his business. Tim provides good jobs and opportunities for local people who want to be involved in the racehorse industry and it’s fantastic to see that they have not been affected by this threat.”