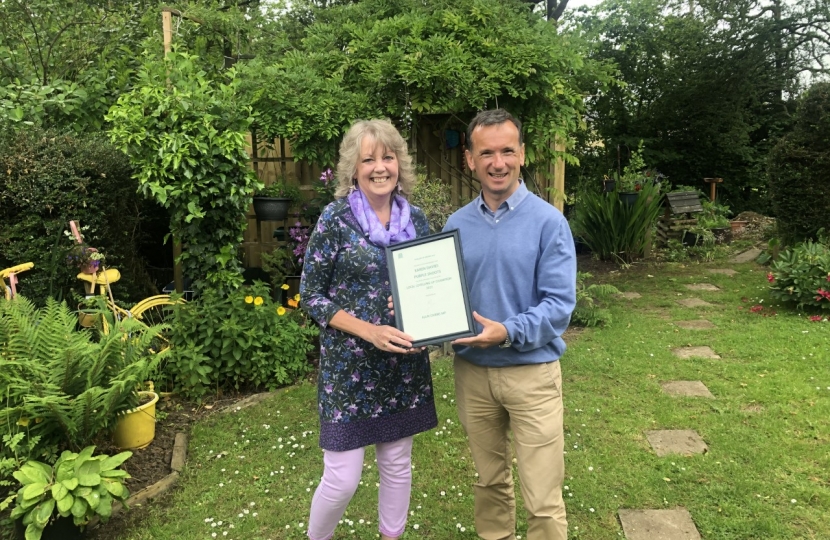 A Vale based micro-finance charity, Purple Shoots, was celebrated as a ‘Levelling Up Champion’ at a new set of awards. The Levelling Up Goals Awards recognise those organisations that are committed to boosting opportunity and being truly purpose-led.

Karen Davies, Chief Executive of Purple Shoots, was named a winner in the ‘widening access to credit and savings’ category. Purple Shoots is an organisation that provide small business loans at fair rates to businesses whom may previously found receiving other loans impossible.

Karen was nominated as a ‘Levelling Up Champion’ by Vale MP Alun Cairns who met with her to present the award. Commenting on the award Alun said, ‘a massive congratulations to Karen and all of the team at Purple Shoots. The work they do is truly valuable to new and struggling businesses across the Vale. They thoroughly deserve this award for their efforts in trying to level up our community.’

In response to winning the award Karen stated she was ‘delighted to receive such an award and to be recognised on a national scale is an honour and I am really thankful for’.

MPs, businesses and others throughout the UK nominated organisations for the 14 different award categories which are focused on equality of opportunity at key life stages.

The categories are based around the ‘Levelling Up Goals’ launched earlier this year by former Education Secretary Rt Hon Justine Greening. The Goals provide a benchmark for activity focused on driving equality of opportunity from early years through to careers, alongside barriers such as the digital divide, health and infrastructure.

Seema Kennedy OBE said: “A huge congratulations to our winners who have shown that they are playing a key role in helping their communities level up. Accelerated by the pandemic, we are seeing a massive shift in expectations of organisations within society and the 2021 Levelling Up Goals Awards celebrate those that are leading the way in being truly purpose-led.

Former Education Secretary Rt Hon Justine Greening said: “The Levelling Up Goals are the UK’s first levelling up architecture and give a clear benchmark for organisations to measure their impact against. Levelling up is something that needs to be addressed throughout the UK and it's great to see so many influential organisations and leaders at the forefront of the agenda.

“I’d like to congratulate all the winners of the first Levelling Up Goals Awards and thank them for their commitment to levelling up.”

The Levelling Up Goals Awards are sponsored by the Harrison Centre for Social Mobility, which supports organisations across the UK that work with young people to achieve their potential.