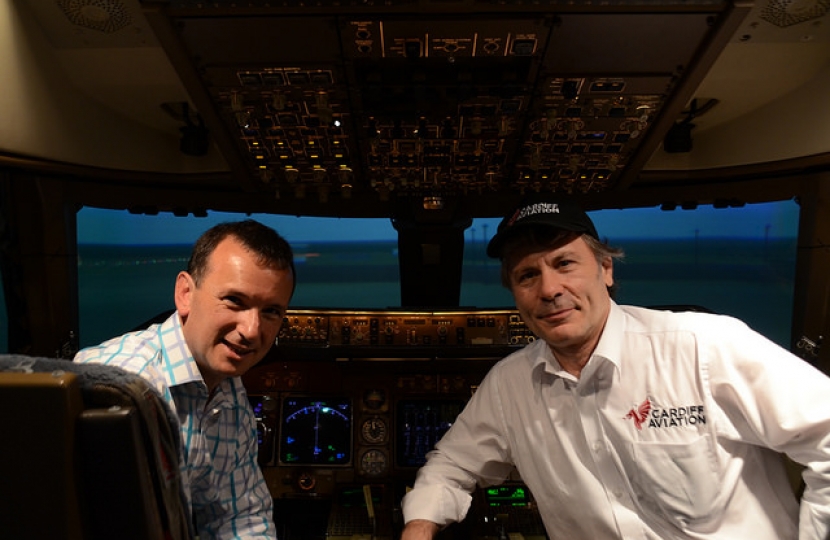 Alun Cairns has worked closely with Mr Dickinson and Cardiff Aviation since their initial project and has supported their multi million pound investment in Commercial Flight simulators to train pilots from all over the world here in the Vale of Glamorgan.

The local MP tested his skills by flying a Boeing 747 – 400 over the UK to land at Prestwick Airport. Alun said that although it was only a simulator, it was an extremely stressful experience and he took three attempts to hit the tarmac.

Mr Cairns said, “It was an amazing experience and so lifelike, even down to the video screens looking out of the window. This was obviously not a toy or arcade game. It has cost a huge sum of money. Bruce and the instructors said it was identical to the real thing.

“This is a fantastic boost to the local area and Bruce, Mario and the team should be congratulated. This is a significant project and will bring hundreds of trainees to the area for a number of weeks at a time. As I was there twenty trainees from Scandinavia were being trained.

“I also took them to a local independent hotel in the hope to encourage them to offer their students accommodation nearby.

“The projected growth in the numbers of pilots required over the next two decades is huge and Cardiff Aviation and the Vale can play a big part in that. The timing is right in that the economy is growing rapidly. This facility gives an opportunity for airlines to train and refresh their pilots as well as enable individuals to make the jump from private licences to commercial flights.

“The courses vary in length and are obviously stretching. They involve the science as well as the practical elements.

“This is a significant feather in our cap.

“I must admit, I was so stressed trying to fly the simulator even without 400 passengers behind me. I can only imagine the pressure on pilots doing the real thing. The simulator was simply fantastic. The number of decisions and considerations pilots needs to make are remarkable. You’ll be relieved to know that there is no chance that I will repeat the activity will passengers behind me.”