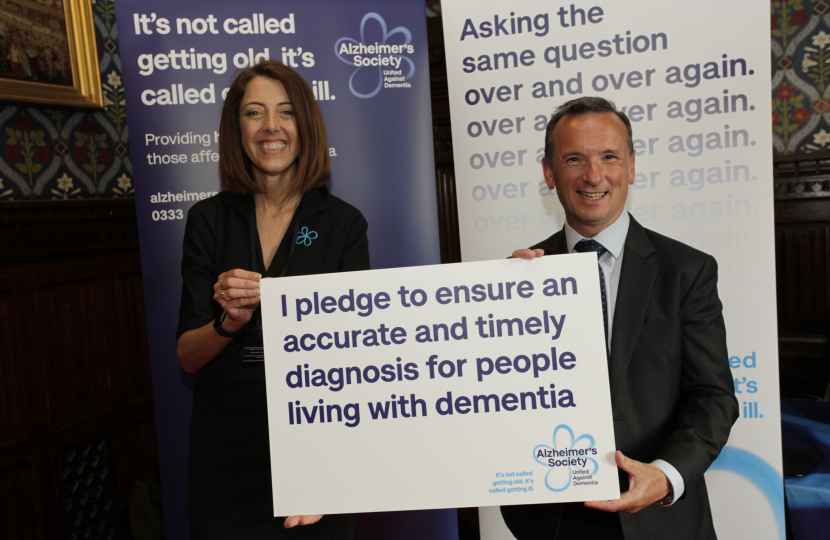 As part of Dementia Action Week (16-22 May), on Wednesday 18, Alun Cairns met with people affected by dementia, experts from Alzheimer’s Society and clinicians at the charity’s Parliamentary reception to find out more about the barriers people face to getting a diagnosis.

There are currently around 50,000 people living with dementia in Wales, with a total of 900,000 across the UK, which is set to rise to 1.6m by 2040. However, with diagnosis rates currently at a five-year low after the pandemic, the charity believes there are tens of thousands of people now living with undiagnosed dementia. This means they don’t have access to the vital care and support that a diagnosis can bring.

Alun Cairns has pledged their support to the charity’s Dementia Action Week campaign – “It’s not called getting old, it’s called getting ill” – which aims to raise awareness of the symptoms of dementia and encourage people worried about symptoms to seek a diagnosis.

Alun Cairns said: “I pledged to support Alzheimer’s Society in their drive to make the recovery of dementia diagnosis rates a priority. 1 people in 4 have battled dementia symptoms for over two years before getting a diagnosis. Anyone worried that you or a loved one may have dementia, should contact Alzheimer’s Society for advice and support.”

James White, Head of Public Affairs and Campaigns at Alzheimer’s Society, said: “We thank Alun Cairns for meeting with us, and showing their support this Dementia Action Week. “Asking the same question over and over again is not called getting old, it’s called getting ill. We know getting a dementia diagnosis can be daunting, but we want everyone to be able to understand and recognise potential dementia symptoms, feel empowered to take the next steps, and come to Alzheimer’s Society for support.

“National diagnosis rates are currently at a five-year low so it is so important that we do everything we can to get people diagnosed so they can get treatment and support. We have launched new resources to arm people with all the information they need when speaking with their GP, which includes online support and advice and a new symptoms checklist which can be printed and taken to the doctor to help both patients and clinicians have an easier diagnosis
experience.”

New research from Alzheimer’s Society shows some people don’t seek a diagnosis because they think memory loss is just part of getting old, don’t recognise the signs of dementia, or are in denial about their symptoms. Though the thought of diagnosis can be daunting, over 9 in 10 people with dementia say they benefitted from getting a diagnosis, for example by helping them come to terms with it or plan for the future.

Support and more information about a diagnosis is just a phone call or a click away. Visit alzheimers.org.uk/memoryloss or call Alzheimer’s Society on 0333 150 3456 [0330 094 7400 Welsh-speaking number] For callers who do not have English as their language of choice, Alzheimer’s Society can arrange a simultaneous language translation service.