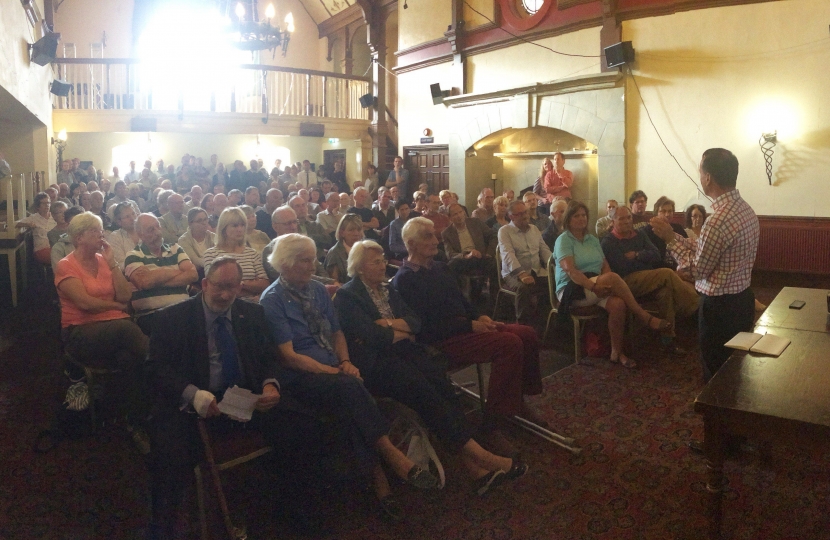 Over 160 people turned up to hear Vale MP Alun Cairns take questions on Britain’s future relationship with the EU this Friday. Up to 30 members of the public were turned away from the event, unable to fit into the great hall at the rear of the Duke of Wellington Public House in Cowbridge.

During the course of the meeting Mr Cairns took questions on immigration, trade and EU regional funding. It became heated on a number of occasions with some of those who had supported remain arguing forcefully for a second referendum despite an initial statement from the MP against the idea.

On the whole, the question and answer session was good natured with Mr Cairns attempting to answer questions from the crowd to the best of his ability against a backdrop of political uncertainty. The Vale MP aimed to give constituents, ‘as much certainty as possible’ about implications of Brexit in what is a fast-moving situation in government.

Mr Cairns said, “I am very grateful to all those who came to the meeting and those who tried to get in. It is a testament to the healthy political engagement we see here in the Vale and is reflected in above average voter turnouts in this constituency.

“Local people asked some very pertinent and well-informed questions about our country’s relationship with the EU. I strove to answer them as well as possible as well as re-assuring those present that the UK Government will move forward in a measured way, and that the country is well-placed to meet the challenges and opportunities of Brexit with calm decisiveness and positivity.”

For those who could not attend the 'EU Referendum - What's Next?' meeting in Cowbridge, Alun will host another public meeting this Friday the 15th July at 18:30 in the Wyndham Conservative Club. All welcome.