Stop the Abuse of Rhoose 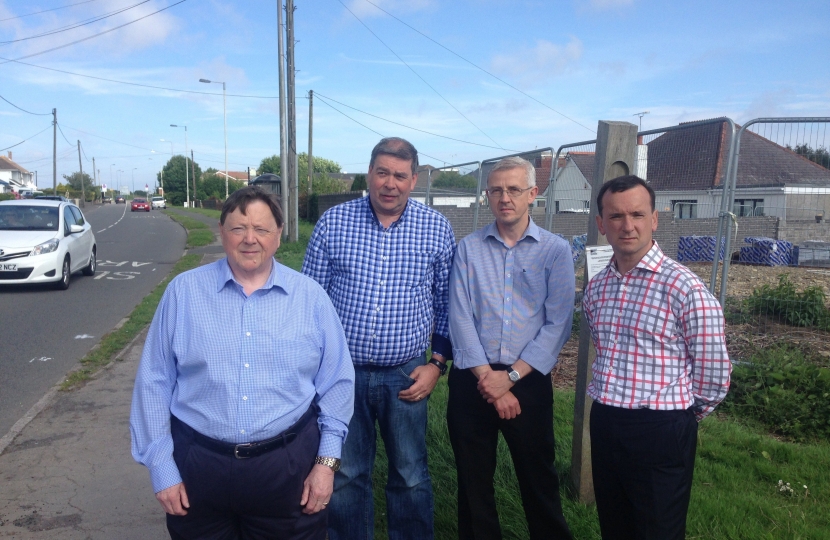 Newly elected Rhoose Councillor Adam Riley has joined forces with veteran local Councillor Jeff James and Vale MP Alun Cairns to condemn what they see as the ‘abuse of Rhoose’. The local representatives met at the proposed Porthkerry Road entrance to Rhoose’s new mega-estate ahead of a protest organised by community activist Richard Barnes. They vowed to unite Rhoose against excessive development and to end what they see as the ‘neglect’ of the community by the Vale Council in Barry.

The protest was attended by 40 local people with concerns about the ‘poorly-planned’ urbanisation of the settlement. The site of the protest was chosen as a result of concerns that the planned junction from the new 690 house estate on to Porthkerry Road will cause ‘traffic chaos’.

The Vale of Glamorgan Council has made plans for the development of over 1,000 new houses in Rhoose over the next decade, despite a perceived lack of infrastructure in the village. Rhoose already has a higher number of both people and houses than Cowbridge, a town with a leisure centre, a super-market and other local amenities. Residents are concerned that Rhoose is being treated unfairly by the authority, with over-development but without the necessary infrastructure to cope with it.

Vale MP Alun Cairns welcomed the Rhoose protest saying, “Rhoose residents have had enough of their village being used to meet housing targets and stretching local infrastructure. The planned estate adjoining the village is significantly bigger than Rhoose Point.

“I am very keen to work with Richard Barnes and the local Councillors to bring the community together to fight for a better deal. The new Focus on Rhoose group is an excellent opportunity to do this and I encourage local people to get involved. Rhoose has been taken for granted because it is seen as divided between Rhoose Point and the old village and doesn’t have a community council to give voice to community protest. Now is the time for unity and strength of purpose in Rhoose to ensure that the area is no longer used and abused by planners.”

Rhoose councillor Jeff James (Conservative)said, “We are standing on the brink of hundreds more houses being built in Rhoose. We know that the Welsh Government has set the Vale of Glamorgan very difficult targets for new house building, but the answer to that problem is not just to use Rhoose to meet county-wide targets.”

He added, “The infrastructure and facilities of Rhoose have changed very little in recent years despite the huge amount of house building that has already taken place. Local resources are under extreme pressure and we are being told by the people of Rhoose that enough is enough.”