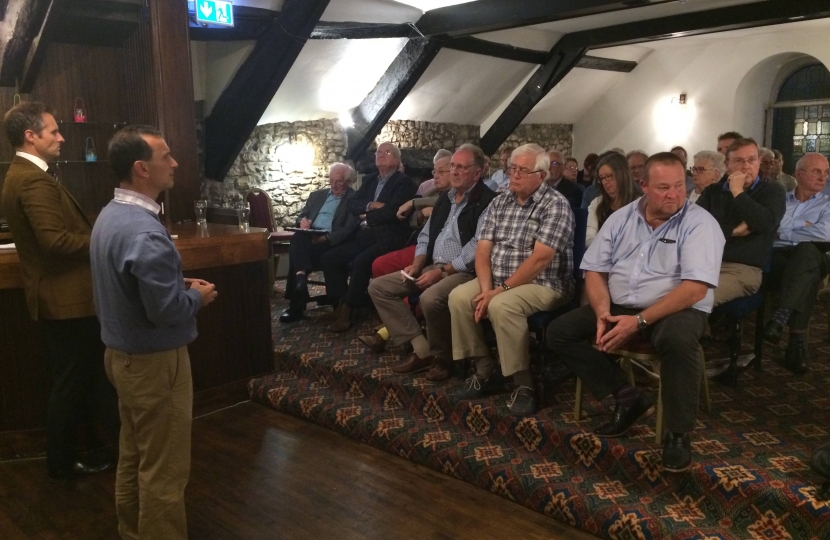 Broadband Delivery UK – the UK Government’s broadband funding programme – has secured nearly £60 million to be spent on broadband in Wales. A proportion of BT’s profit has to be put into an investment pot. BT have brought forward a considerable sum of money from that investment pot to be spent in Wales. At the moment, BT, the UK Government and the Welsh Government are in the process of deciding the best way for this money to be put to effective use in Wales.

The 4% Without Superfast Broadband

Concerns were raised by councillors who feared their communities would fall into the 4% who will remain without access to superfast broadband. Ed Hunt explained that the typical reason for a property falling in that 4% will be due to its difficult geographical layout which will therefore mean that the necessary engineering work will be very complicated. BT have a duty to be cautious when spending public money, and therefore have to consider the properties for whom providing access will be too logistically difficult. There exists a grant scheme with Access Cymru where a household can be paid up to £800 to buy an alternative service to gain superfast broadband. This grant scheme is not currently offered in England, and is an active step to ensuring that Wales’ most remote properties are not left behind in the superfast broadband rollout. BT will also look into co-investing with a community who wants to purchase a fibre broadband solution.

There is the possibility of installing a direct fibre connection to an individual property, however this is designed only for businesses given that the cost is so high. It costs £750 for installation, an extra £3 for every metre away the property is from the cabinet, and an additional £150 for the monthly rental.

Alun Cairns ensured that the UK government are continuing to work with all other bodies to ensure that a plan is in place for those in the 4% bracket. The Welsh Government also confirmed that in November 2016, they will be reviewing the current gaps.

Llysworney, an area which does have access to superfast broadband, is experiencing sporadic drops in the broadband. Some residents reported drops up to 6 times a day, meaning that the good broadband speeds available in the area are of little use. This is not a problem which BT currently recognises, apart from in Dyffryn where the broadband has to travel a long way along copper wires. Ed Hunt agreed to go away and research this problem further as it was not something he had any knowledge of up until now, although he did predict the issue may be due to exchange only telephone lines.

The question was asked, whether changing supplier would make a difference. Ed Hunt suggested that it probably would not, as all suppliers would be using the same service.

A representative of St Athan informed Ed Hunt that BT Infinity is installed in the village, but the connection within the village uses copper wire. Copper wire proves to be problematic during inclement weather, especially when there are lightning strikes or heavy rain. BT do not intend, at this point, to replace every copper wire with fibre, unless it is faulty or not working sufficiently.

Alun Cairns urged councillors to make provision for fibre broadband a condition of planning, thus forcing developers to work with BT and ensure every new build has access to superfast broadband. BT considers this a necessity, in order that the 96% target remains achievable.

The new development in Colwinston will be served by the existing cabinet that already serves the village. Colwinston has access to superfast broadband thanks to this cabinet. Ed Hunt reassured Colwinston’s representatives that the current residents of Colwinston should not see a deterioration in their broadband speeds when new residents move into the Redrow site.

The issue of customer service was raised, with many who had rang BT for help or to make a query, not feeling as though they were receiving sufficient responses. Many had found it difficult to report their local problems to BT particularly due to customer service managers not being fluent in English or having incomprehensible accents. Ed Hunt confirmed that earlier this year, the Chief Executive of BT promised that customer service will improve, especially for those who ring the helpline with a query.

The 4G rollout will go much further than 3G ever did, as seen already in Llantwit Major. There has however been a problem with mobile signal in Cowbridge, as raised by Cllr Geoff Cox. Alun Cairns is going to look into why O2 signal stopped being received in the town since April 2016 and will urge EE to provide a better service in Cowbridge.

The Digital Economy Bill is going through parliament at the moment. Following its second reading, Alun Cairns is working in conjunction with Julie James AM to ensure that Wales benefits.