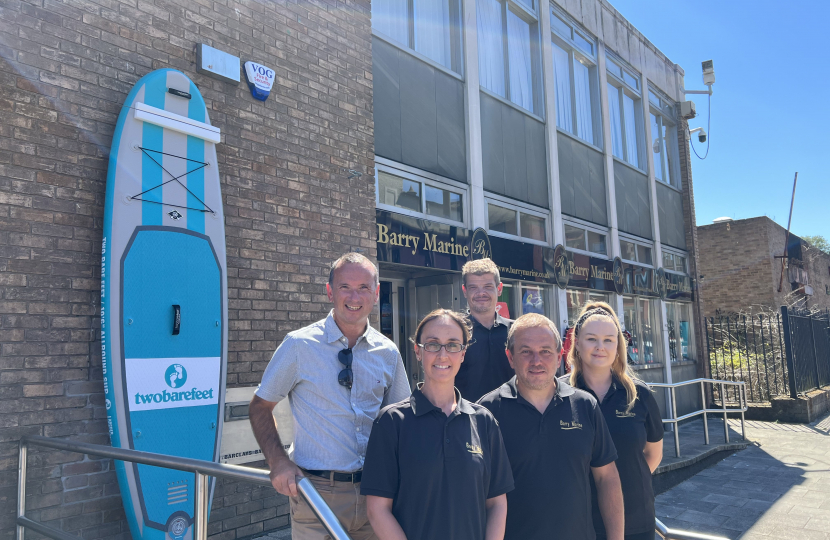 The Vale MP was welcomed by the Barry Marine team who have embarked on a new project to provide the town with the latest water sports equipment, selling everything from wetsuits and paddleboards to swimming equipment such as goggles and caps.

Alun Cairns MP stated that “it is great to see local entrepreneurs foreseeing the potential of a Barry Marina in the business and local investment that it will bring to the town. Following the introduction of the Marina, Barry will be a hub of activity for water sporting fun.   I love welcoming new businesses to the Vale, and I wish them all the best.”

Co-owner Nigel has commented “Barry Marine have had a great welcome to the Vale from local residents and water sport enthusiasts, we are really looking forward to the Marina being approved and hope to develop the business to support the wider boating community.”

The bid for the Barry Marina was submitted at the end of July, consisting of funding of up to £20 million through the UK Government ‘Levelling Up Fund’. We expect to hear back about the result of the bid in the Autumn, with the leadership election providing a slight delay.

A buzz is building around the bid for the Barry Marina, as Alun Cairns MP continues to work with the UK Government on the project.

Support my plan for Barry Marina - the next step in my plan to Level Up and regenerate Barry.

Vale MP Alun Cairns has set the ambition to bring a marina to Barry to continue the regeneration of our town.