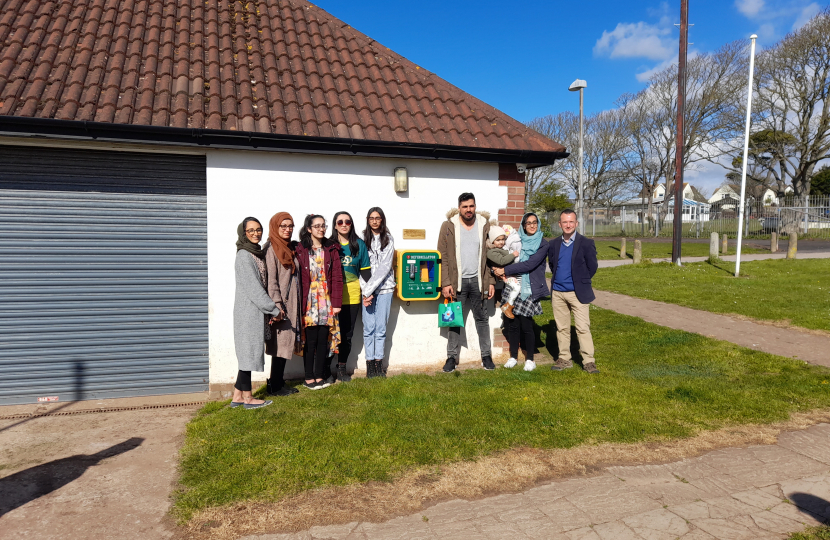 On Saturday 9th April, Sully Centurions Cricket Club unveiled their first defibrillator installed with electrical line and heated cabinet, in memory of Maqsood Anwar, a 44-year-old father of 3, from Barry, Vale of Glamorgan, who collapsed and died in July 2021.

Since the tragic incident, his sister-in-law, Aisha Arshad, with the support of Alun Cairns MP, has campaigned tirelessly for a defibrillator to be installed at the sports ground and for adequate training to be provided, to prevent such a needless loss of life occurring again. Having a defibrillator on site ensures that immediate medical attention can be administered and saves vital minutes whilst waiting for an ambulance.

At the unveiling Alun Cairns MP said “When we come into this life, we try to do our bit and when we leave, we hope we will have made a little difference in some way. There is no doubt that Maqsood’s time here was far too short, but he will have made an incalculable difference to others, in initiating this campaign and in saving countless lives in the future. As the quote from the Quran says 5:32 Whoever saves a life it will be as if they saved all of humanity”.

He went on to pay tribute to Maqsood’s family, the community, all those who had contributed financially, Cricket Wales and the community council for their work.

David Sylvester, Chairman of the Centurions Cricket, announced that a game would be played at the end of the season in Maqsood’s memory, and the winning team would be presented with the Maqsood trophy.

Aisha is also working closely with Barry athletics club and the local Mosque and hopes to have portable defibrillators installed soon.

As part of Dementia Action Week (16-22 May), on Wednesday 18, Alun Cairns met with people affected by dementia, experts from Alzheimer’s Society and clinicians at the charity’s Parliamentary reception to find out more about the barriers people face to getting a diagnosis.