Public Vote Crowns Tynewydd as Pub of the Year! 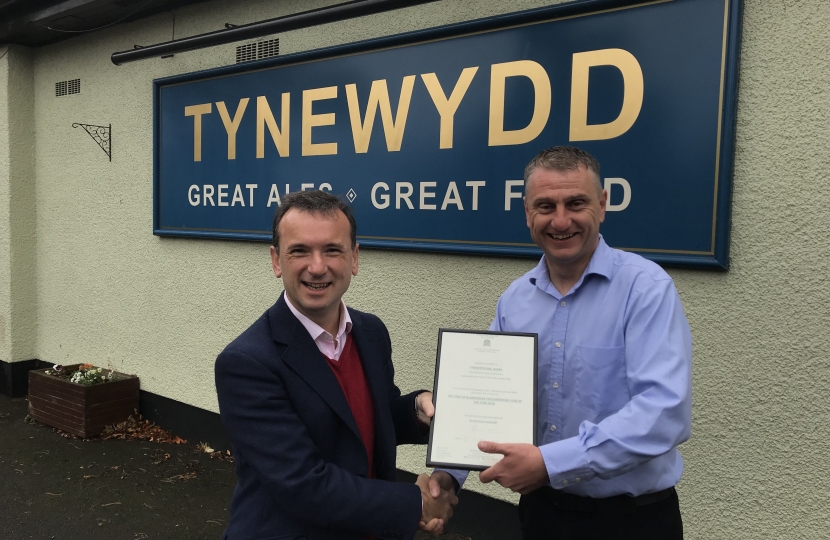 Tynewydd, Barry, has been crowned as the Vale of Glamorgan’s Parliamentary Pub of the Year after a public vote where pub-goers voted for their favourite pub across the Vale.

Vale MP, Alun Cairns, has held the public vote to determine his choice for the Vale of Glamorgan Parliamentary Pub of the Year, which will be put forward as his nomination in the UK-wide competition held by the All-Party Parliamentary Group on Pubs. Eleven pubs across the area took part in the competition, with hundreds of local residents casting their vote for their favourite.

Stuart Giggs, Manager of Tynewydd, was delighted to receive the award from Mr Cairns and looks forward to his pub going forward to the national competition.

Mr Cairns said, “I’m really delighted about the way the competition was run, so many people across the Vale engaged and gave wonderful reasons as to why their choice was the best pub in their eyes. Things like this help to remind us of the huge value and contribution of local pubs to our communities. They are often the lifeblood of towns and villages and they deserve huge credit for the way in which they pull us all together.”

He added, “I’d like to congratulate Tynewydd for their incredible effort to get a massive response from members of the public, Stuart and his team are clearly doing a fantastic job! I’d also like to pay tribute to all other pubs that took part, we are lucky to enjoy some brilliant pubs here in the Vale and that was clear with the response I received.”