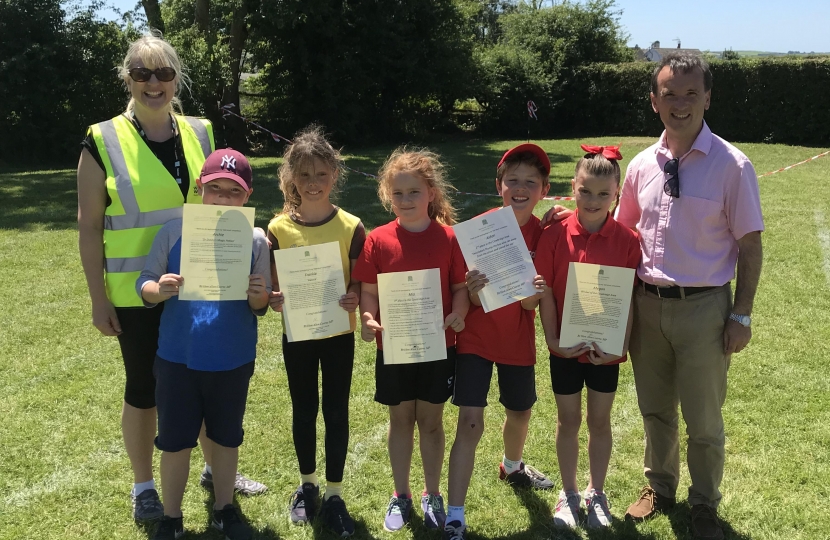 The local MP visited to present certificates to children who took part in his 500 Word Short Story competition. Pupils from years 3 & 4 submitted stories on a range of subjects, which were then judged by Alun Cairns MP.

Mr Cairns decided to set up his competition in response to Hay Festival, which took place in Wales last month, so that children across the Vale could compete to be the winner for their local area. At St David’s Primary, he announced that Megan was the winner for Cowbridge Area, with Aidan finishing in second place and Mia in third.

Commenting on the competition, Mr Cairns said, “It was great to get the opportunity to congratulate the winners of my competition. I was very impressed with the quality of the stories submitted. I hope that those who participated continue to engage with literature and use their imagination to write many more exciting stories.”

While visiting St David’s Primary, Mr Cairns also helped out with the school’s Sports Day, handing out stickers to the winners and he even took part in the tug of war. As children prepared to start their races, Mr Cairns was able to offer some words of advice given his own vast experience, which includes seven marathons over recent years.

Mr Cairns said, “It was a real credit to the teachers, in particular the Head Teacher Mrs Hoffrock, with how well the day went. It was very enjoyable for both children and parents and it was a pleasure to be involved.”