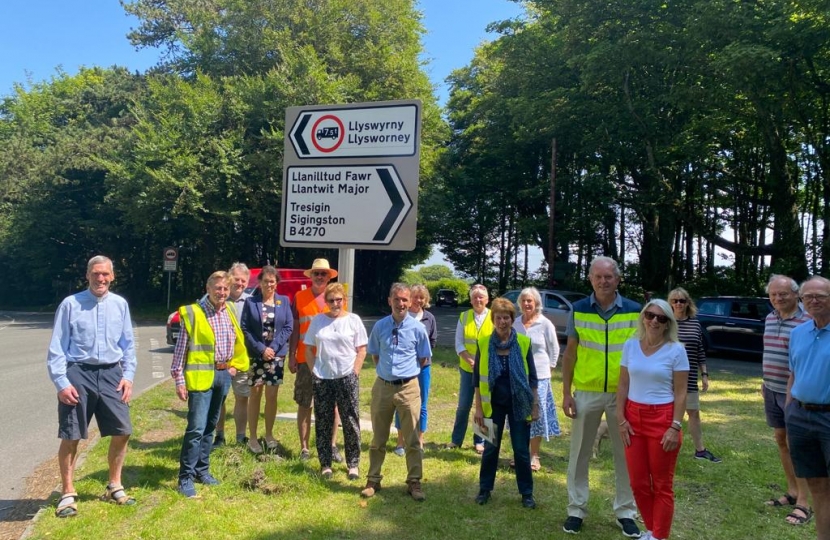 Nash Junction in Llysworney is to be restructured under plans announced by the Vale Council in order to divert traffic away from the village towards the bypass. A local campaign group, working alongside Cllr Christine Cave and Vale MP Alun Cairns, have been coordinating closely with the Council to develop the plans which have been welcomed by Llysworney residents.

Previously, large HGVs had been travelling through the village in order to get to the A48. Under the plans, weight limit signage and the realigning of the road at Nash Junction, will deter traffic from entering the village.

The Authority, led by the Director for Environment and Housing Miles Punter, have developed an alternative where the gateway to Llysworney will be narrowed, along with suitable road markings highlighting the limitations. The junction towards Cowbridge is proposed to be widened to make the turn easier and more obvious.

The news has largely been welcomed by local residents and those involved in the campaign. Alun Cairns MP, who has been actively working towards a solution, stated, “I want to pay tribute to the Action Group, Community Council and Cllr Cave for pressing the Authority for a solution and for the way in which they have responded. The new plans will significantly improve the historic traffic issues of Llysworney and improve the safety of the residents who live there.”

The work to restructure the junction is expected to begin later this year.

Many Vale residents have had Council letters landing at their door in regard to ‘illegal crossovers’, which has generated a high level of correspondence.