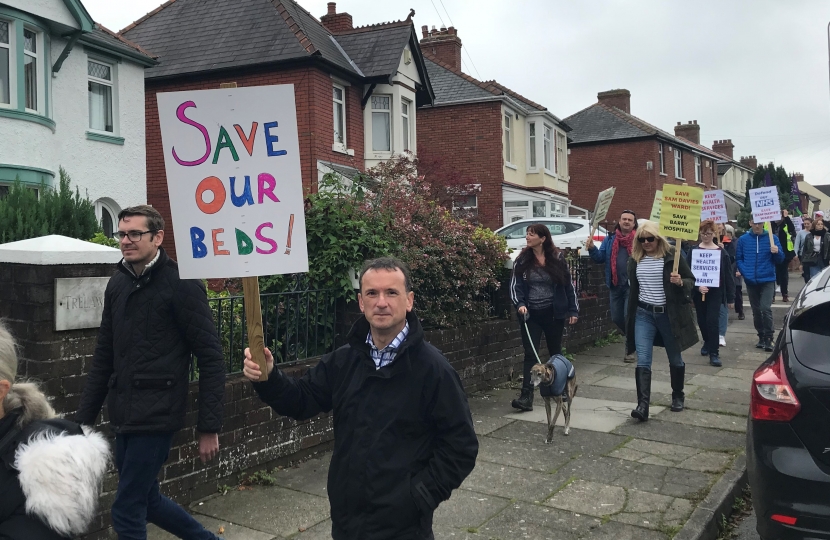 Column for the Glamorgan GEM by Alun Cairns MP:

At the weekend, I joined the protest and march, organised by Unison, against the proposed closure of the Sam Davies Ward at Barry Hospital. This is a huge issue which has united our community in opposition to the closure.

It’s absolutely vital that our community engages with the consultation and makes it perfectly clear that we will not stand for local health services to be diminished. Barry is a growing town and the demand for Barry Hospital will only increase – but it must be supported and continue to offer valued services. Therefore, the Welsh Labour Government must reverse the proposals to close the ward.

The Prime Minister has announced a new hospital building program in England - where he is directly responsible for Health. Locally, under devolution, the Welsh Government is control of Health and we are sadly seeing a reduction in local facilities. The centralising of services in Cardiff may work for Cardiff, however it does not work for Barry and the Vale.

The Prime Minister’s commitment on health spending will mean that additional funds will come to Wales. Due to the settlement I helped to negotiate as Secretary of State for Wales, the Welsh Government will receive £120 per head for every £100 spent per head in England. With this in mind, it’s vital that the Welsh Labour Government matches the PM’s commitments.

I am determined that we get a positive result in relation to the Sam Davies Ward and that is why I have arranged a Community Surgery specifically to discuss the Sam Davies Ward proposals. The public meeting will seek to establish the facts around the public consultation, which ends on 1st November 2019, to ensure that residents can effectively engage with the Health Board.

The meeting will take place from 6.30pm on Thursday 17th October at Brynhill Golf Club in Barry.

I am also holding another public meeting on Brexit tonight, Thursday 10th October, at the Duke of Wellington in Cowbridge. I have already held a number of these meetings across the Vale, however I think that it is vital that constituents can regularly communicate with me on the biggest issue of our time and that I am available to update on the latest developments.

All Vale of Glamorgan constituents are welcome to attend either of my public meetings. If you do wish to attend, please register a place by emailing me on alun.cairns.mp@parliament.uk or calling my office on 01446 748657.

The Prime Minister has now come forward with a Deal, which I believe offers a fair compromise and a route for the UK to Leave the EU on 31st October with a Deal. It’s paramount that the result of the 2016 Referendum is respected and I am doing all that I can to ensure that Brexit is delivered.

On Friday I visited Crawshay Court in Llantwit Major where I met volunteers who took part in the Llantwit Major Garden Volunteering Project and the residents who have benefitted from the scheme. I would like to pay tribute to PCSO Rhiannon Cummings and Mark Ellis from Vale Homes, who have led the initiative, for their hard work in bringing this together. It was great to learn about the positive difference this has made and well done, also, to all of the volunteers who have given their time to support the project.